This superb pair of chairs are copies of an original model made around 1750, examples of these models, originally probably from a larger set, can be found in The Gerstenfeld Collection (pair armchairs) sold by Christies, The Lady Lever Art Gallery (one armchair) purchased by Moss Harris June 1915 and later the same month sold to Lever for a considerably higher sum and also the V&A (stool and armchair).

The original chairs are documented in the book ‘Masterpieces of English Furniture – The Gerstenfeld Collection’ which is a Christie’s book, these chairs being described as a ‘strikingly sculptural pair of George II library armchairs, part of a larger suite of which six armchairs and a stool are now known. They are the collector’s dream for one thing and one thing only – the use of the dolphin head as a decoration. Dated around 1750, these armchairs are superbly and richly carved in mahogany. Notice the quite beautiful arms, outstandingly carved with dolphin heads with scaled S-shaped supports to the tail…certainly the work of a great chair maker – carved with acanthus, C-scrolls and scaling on the front legs which terminate with dolphin heads. These chairs are very important examples...’

This highly decorative and impressive pair of chairs date from the late 19th/early 20th century and have been finely crafted and carved to replicate the original model.

The chairs consist of a shaped and carved top rail with a carved central rocaille (shell like) decoration with carved scrolling acanthus to either side leading down to carved uprights and drop-in upholstered padded back.

This leads down to the carved and moulded seat rails with drop-in padded seat leading down to a profusely carved apron to the front with carved central rocaille and foliate decoration flowing into the front cabriole legs, these being profusely carved with foliate and rocaille decoration leading down to a scaled body terminating with the dolphin head.

The shaped and carved side rails lead down to the cabriole legs to the back with carved foliate and rocaille decoration to the top and terminating with a pointed toe.

We have left these chairs with what we believe to be the original upholstery and as can be seen there is some wear - however this can easily be changed either once purchased or please do not hesitate to contact me to discuss this further – this being an easy task for an upholsterer due to the drop-in seat and back.

This pair of chairs are in excellent original condition, are of stable construction and can go straight into a home or collection – if an original pair of chairs of this model came onto the open market for sale today they would undoubtedly sell for many thousands of pounds. 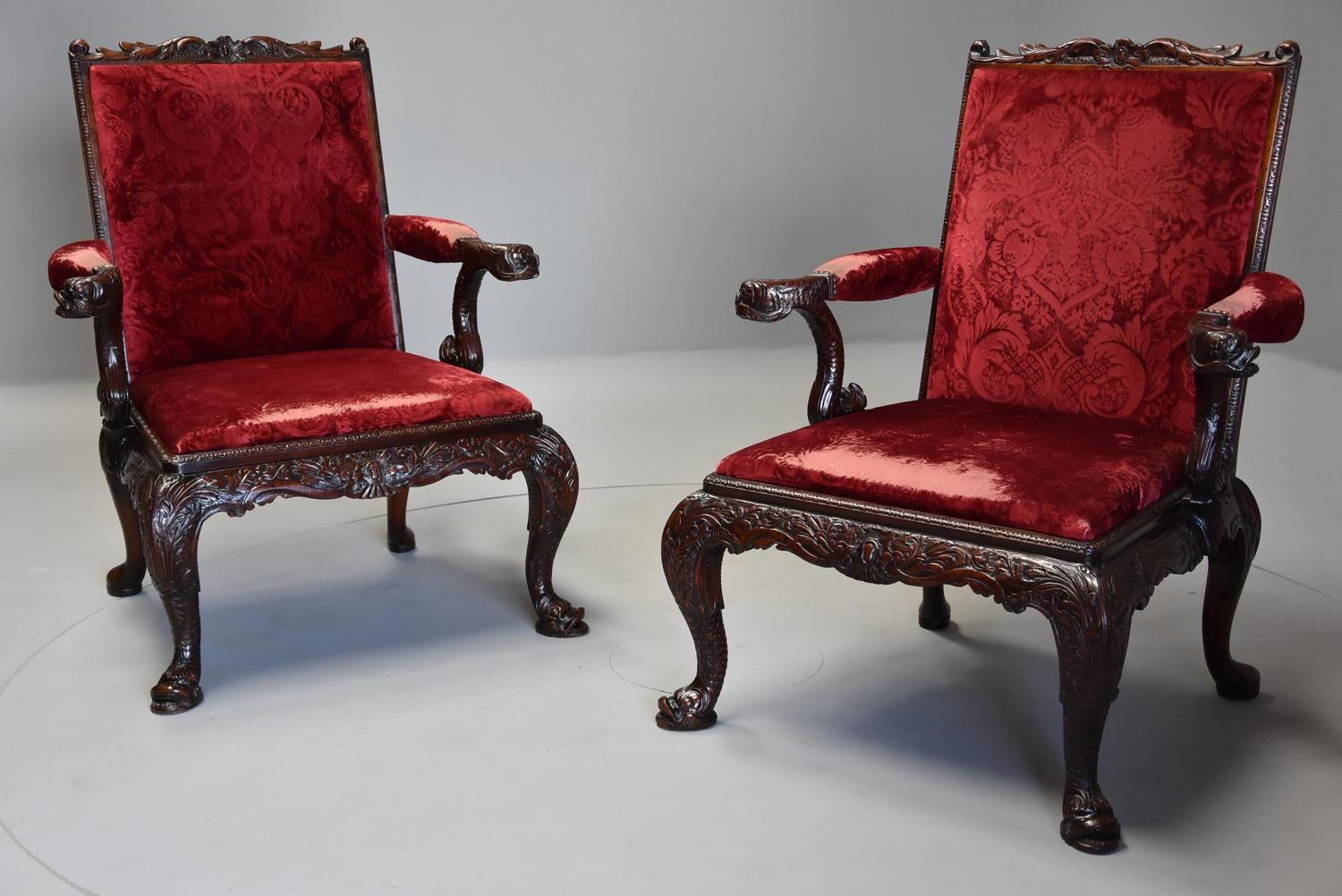 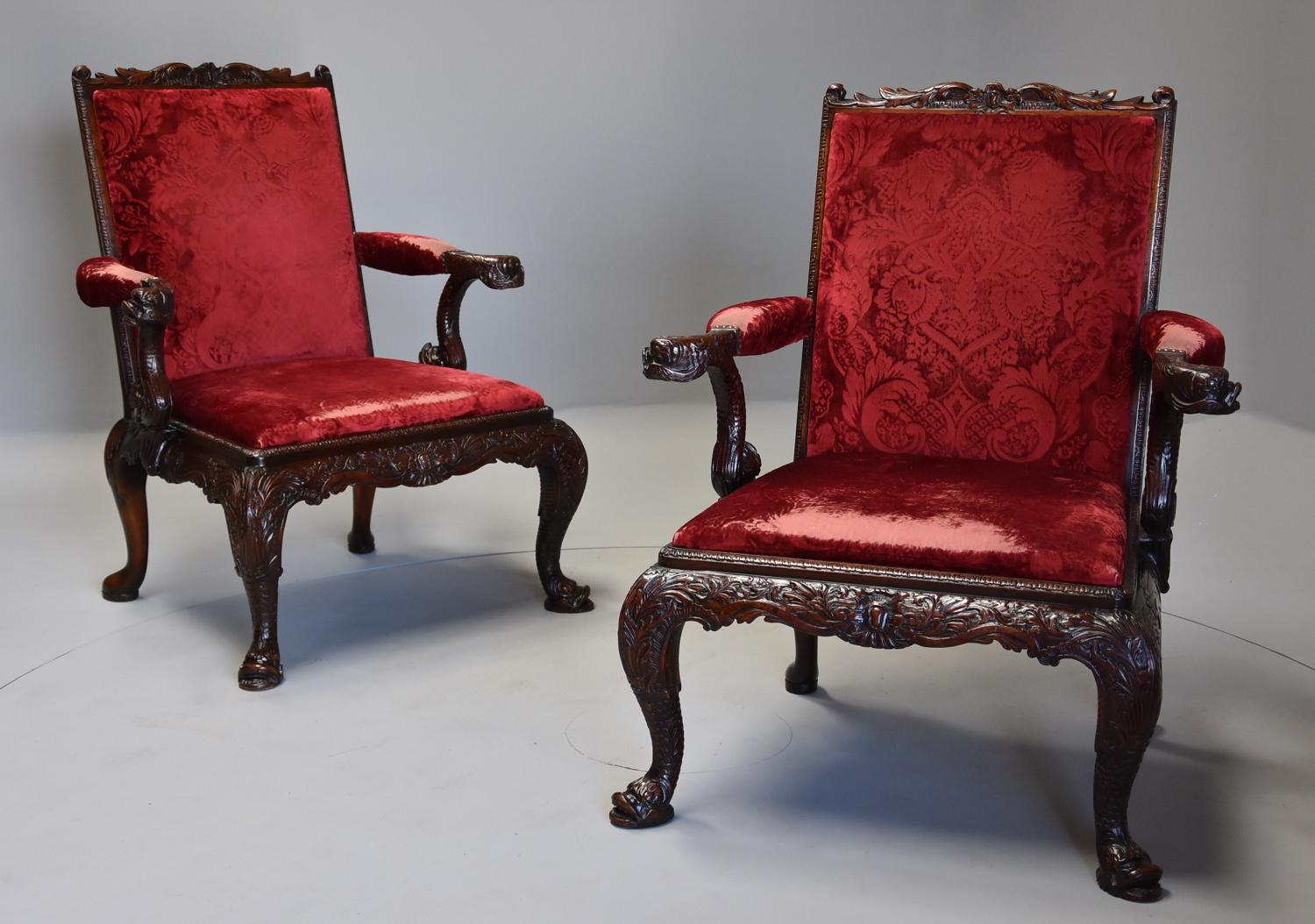 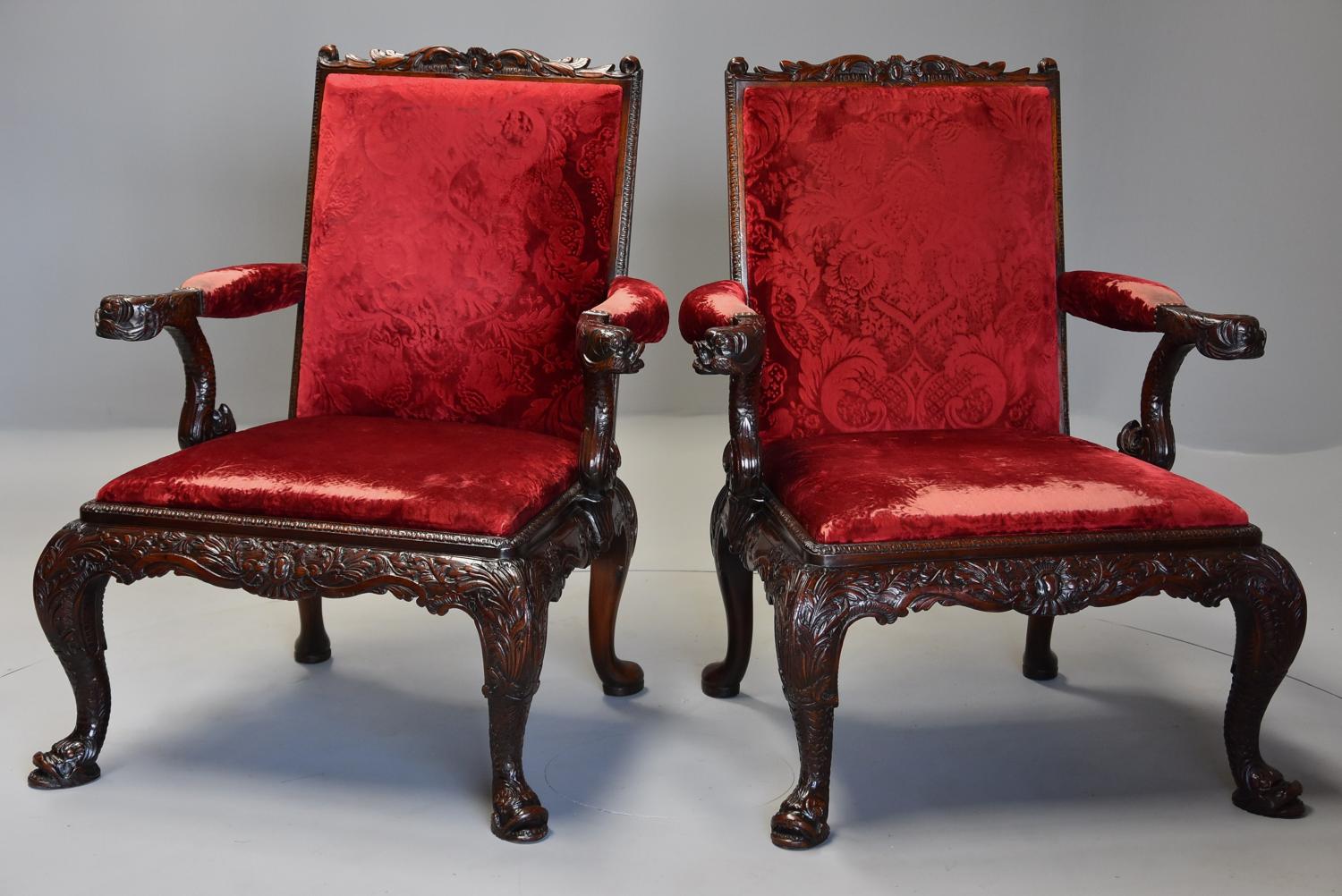 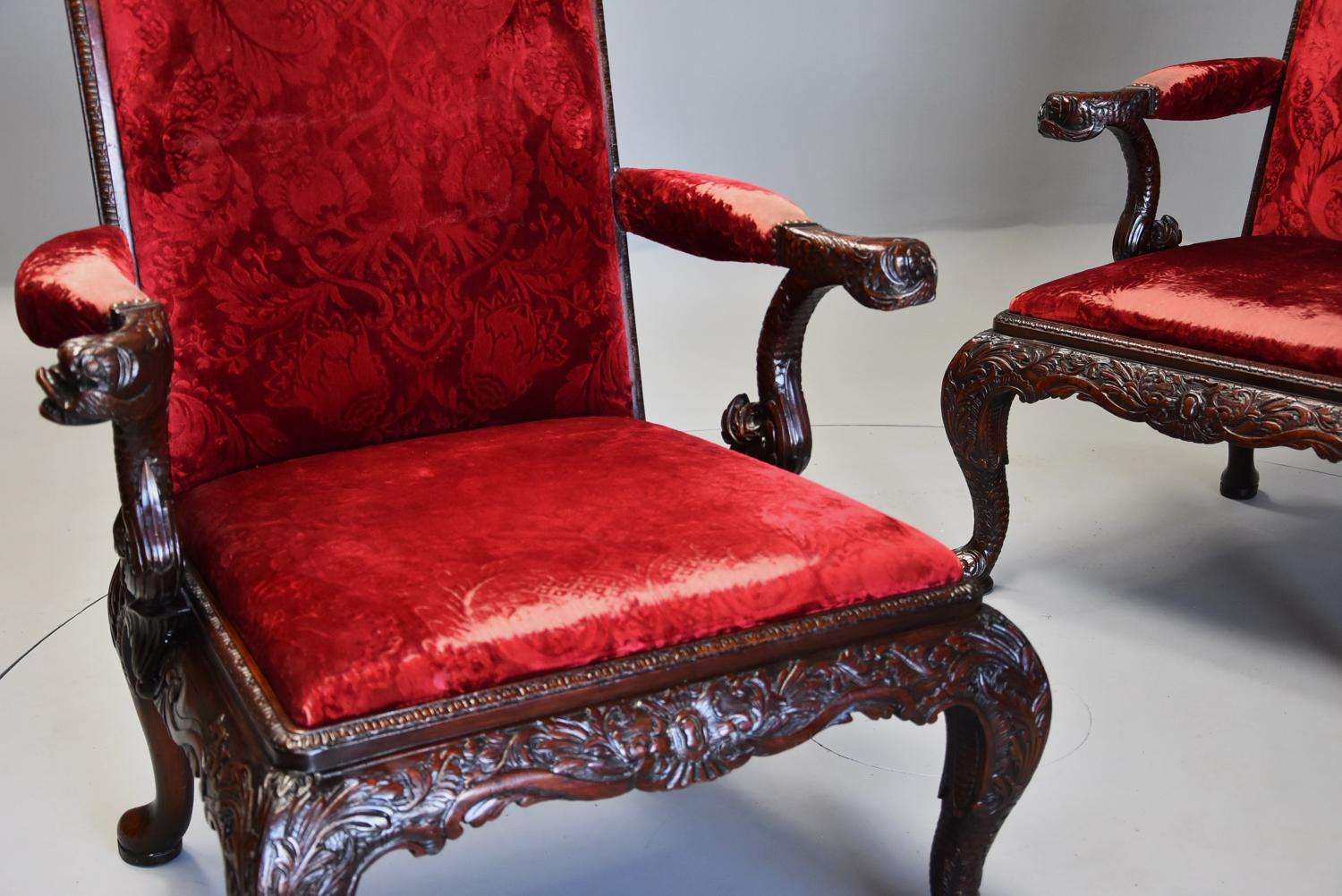 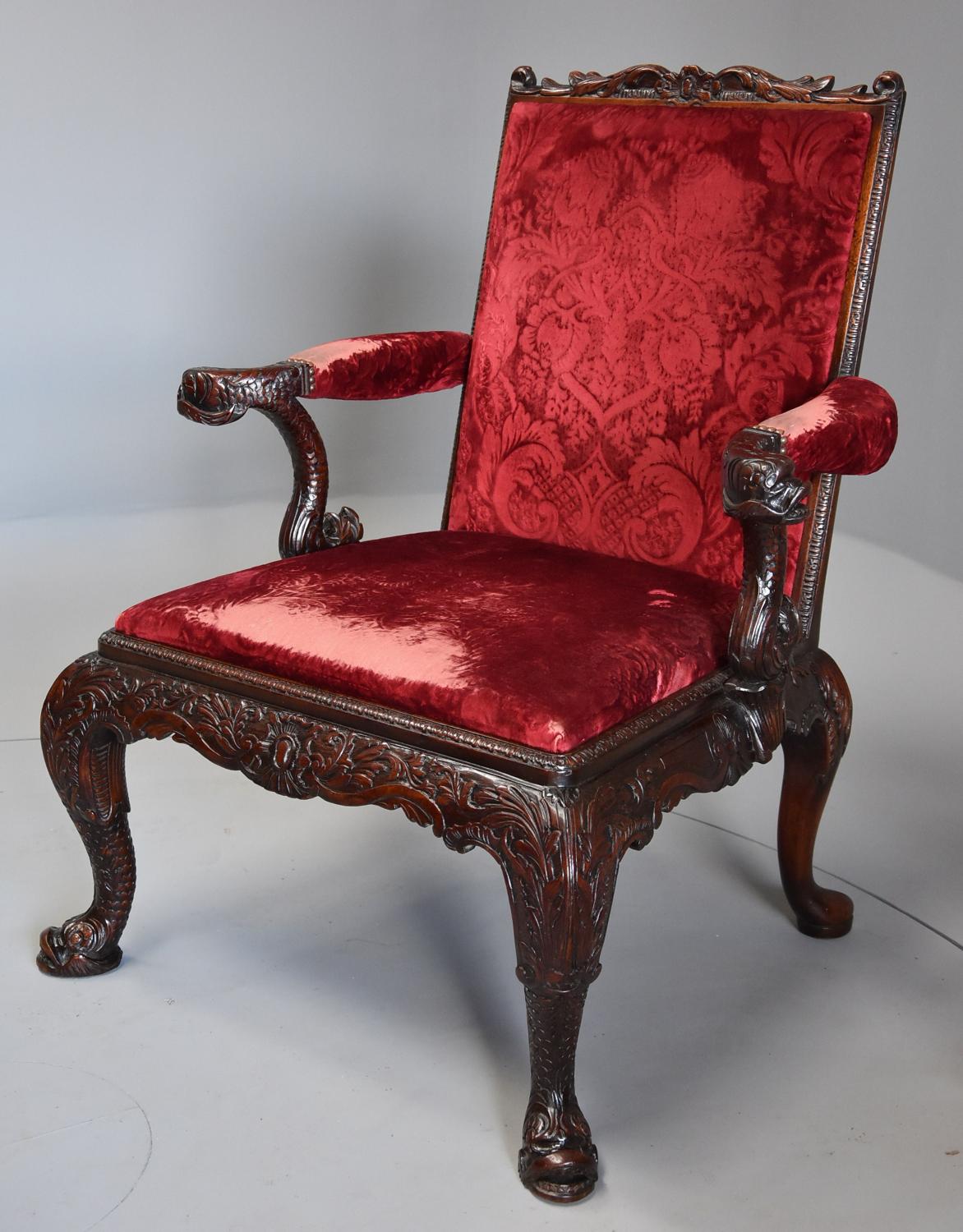 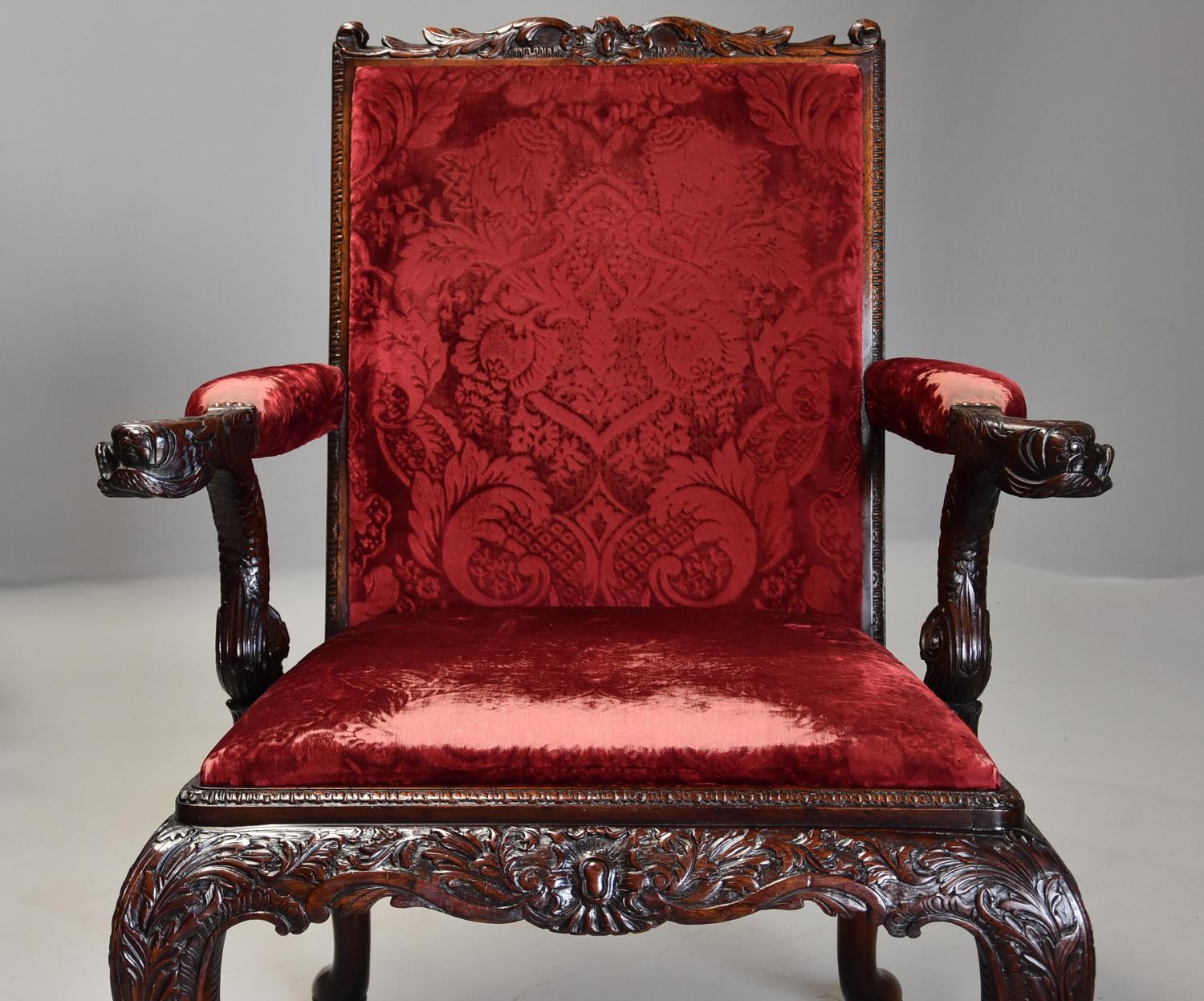 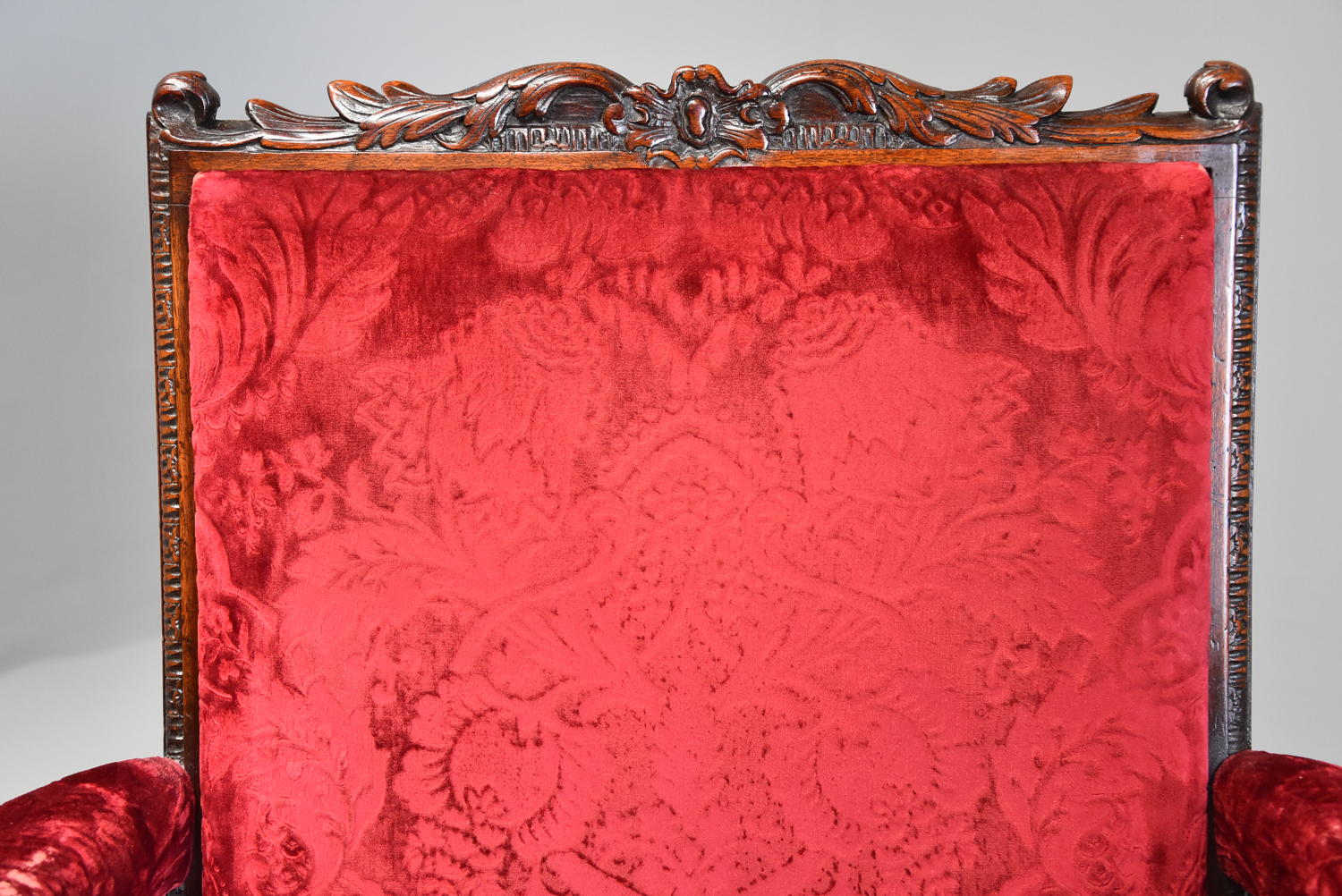 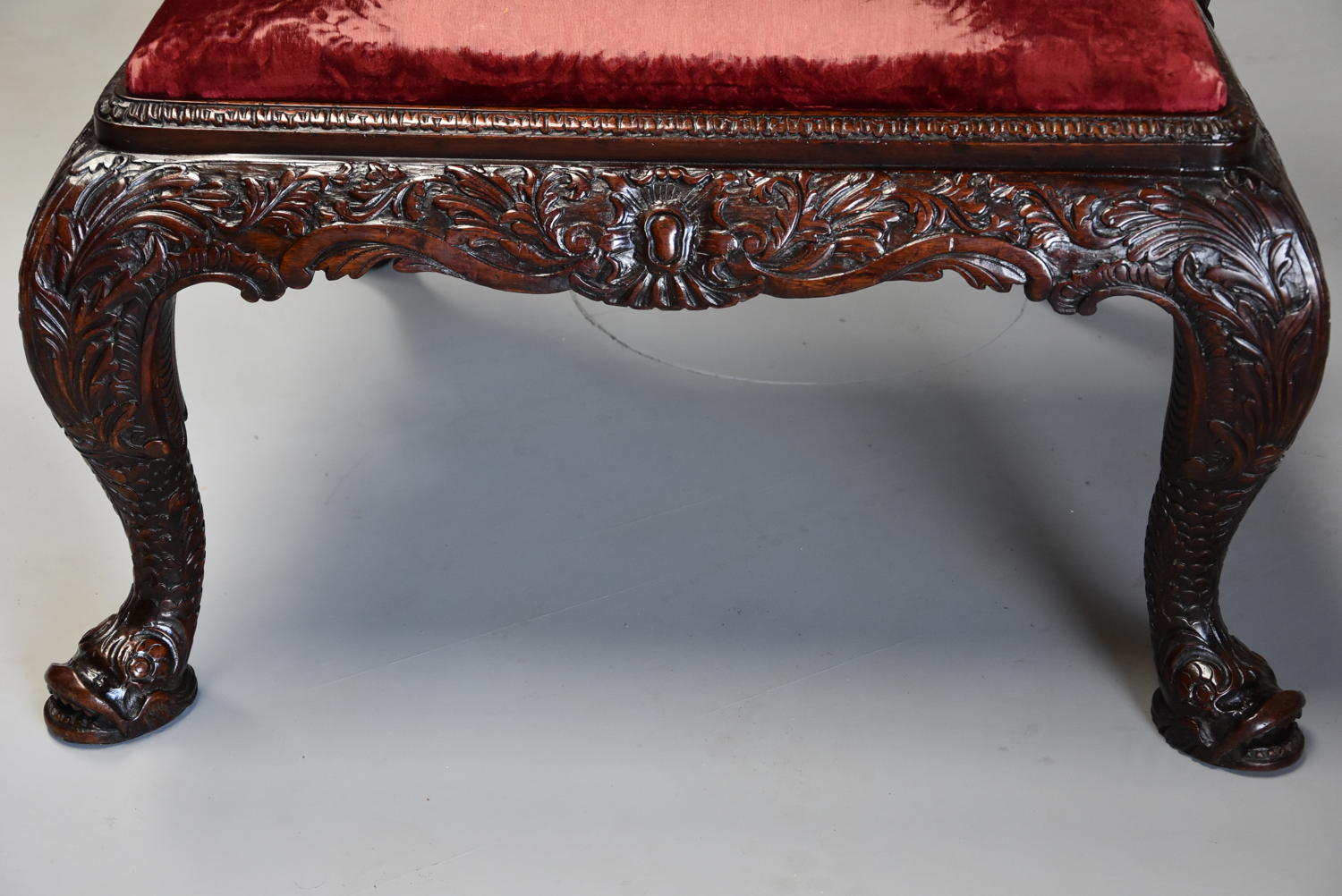 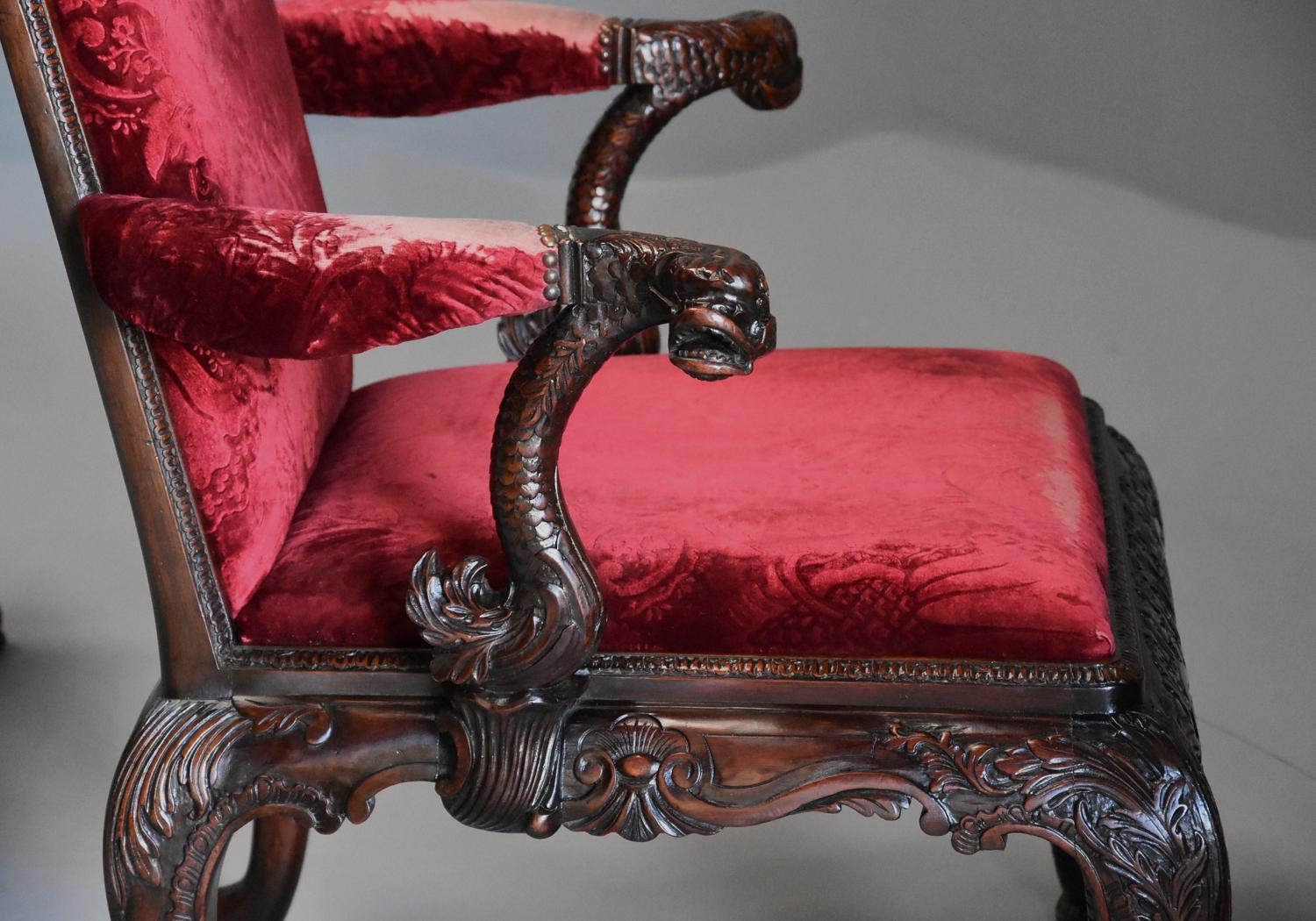 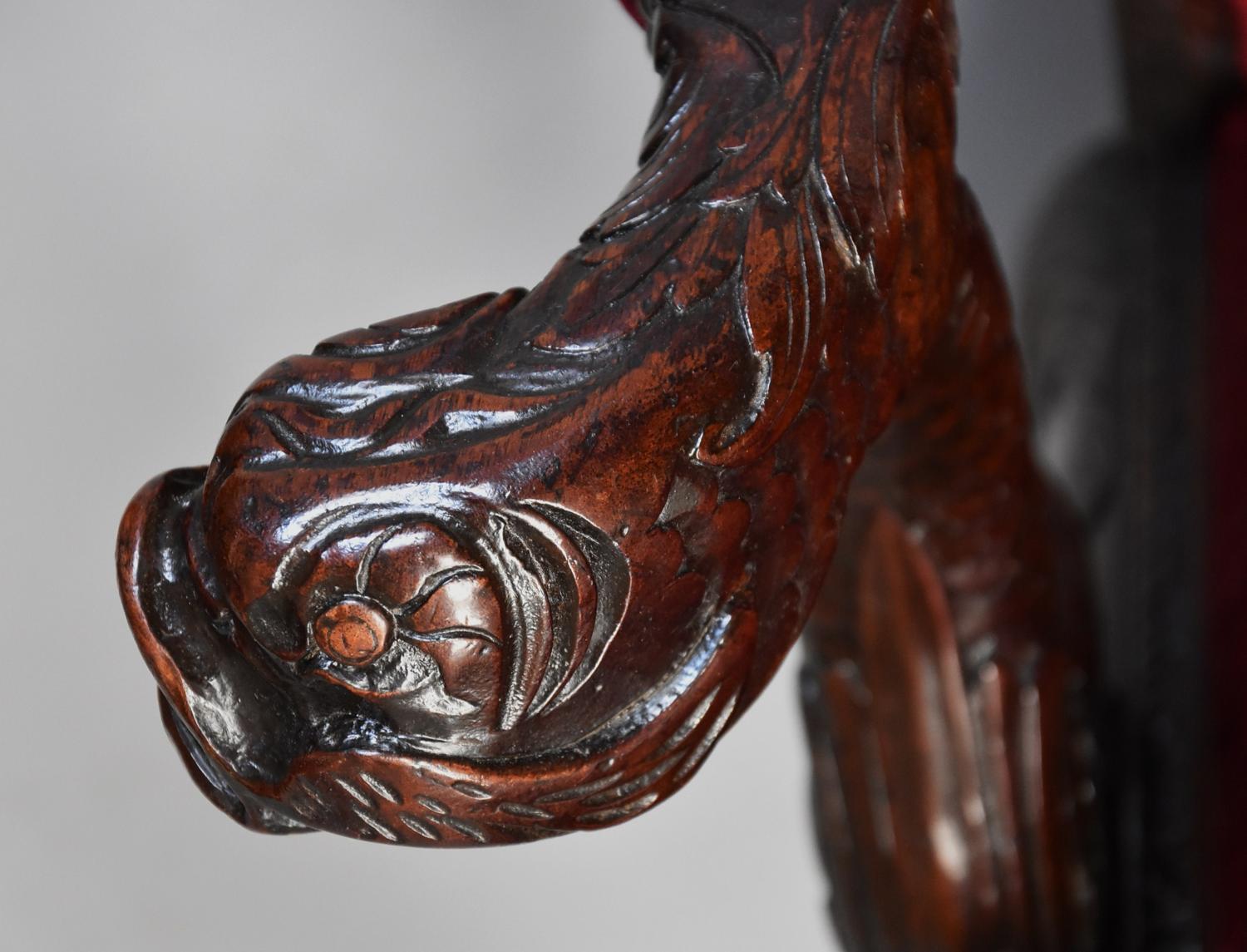 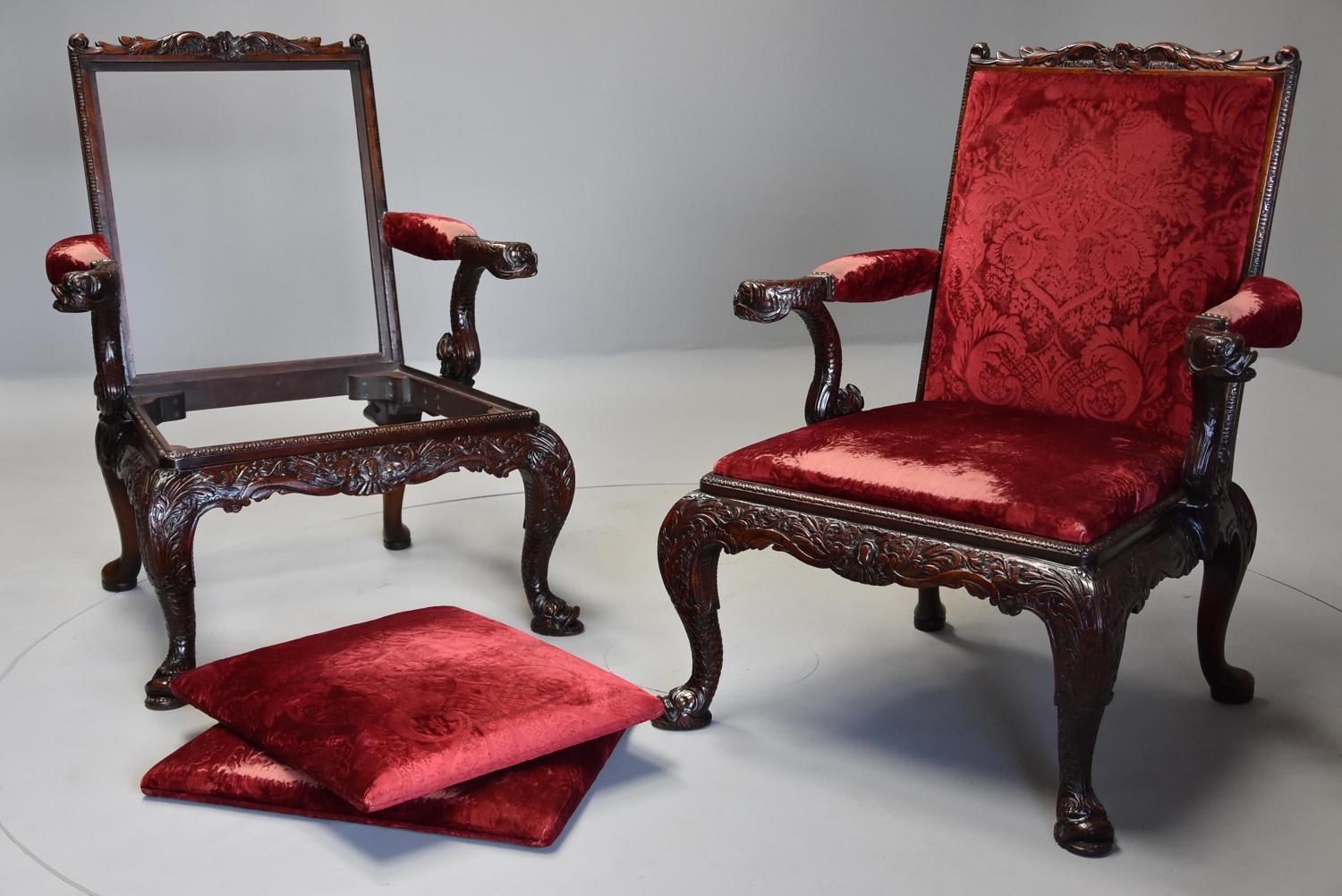 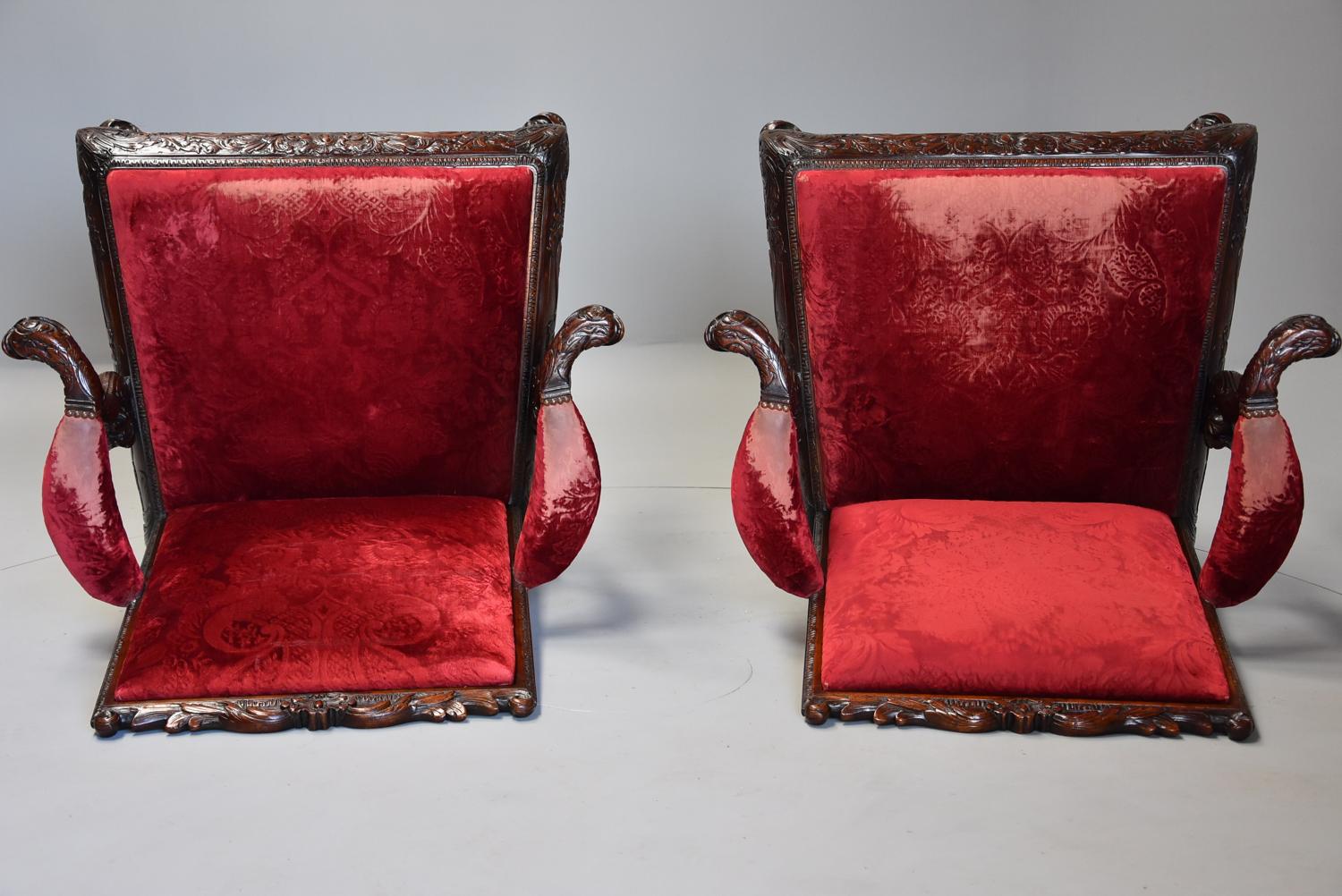 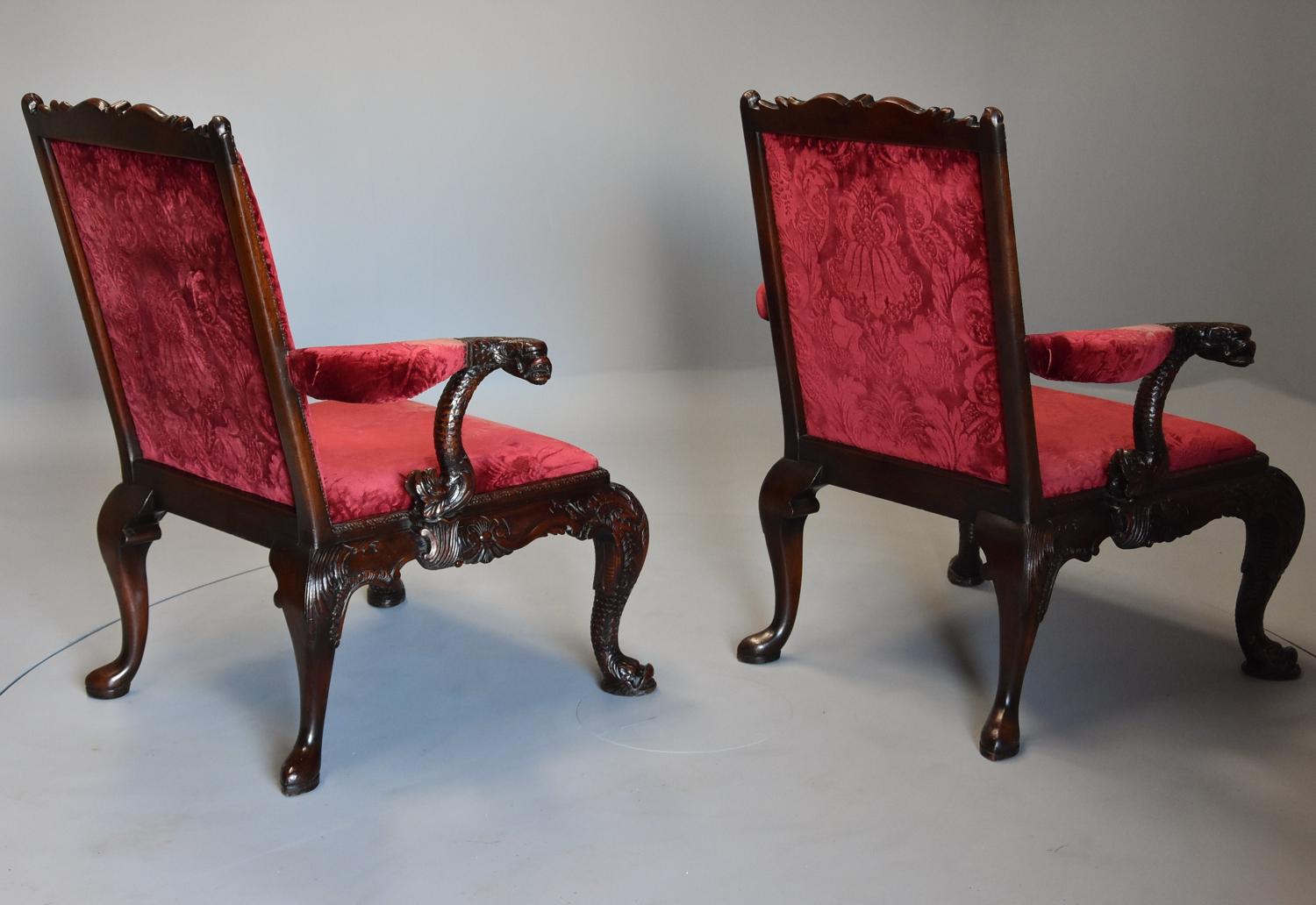