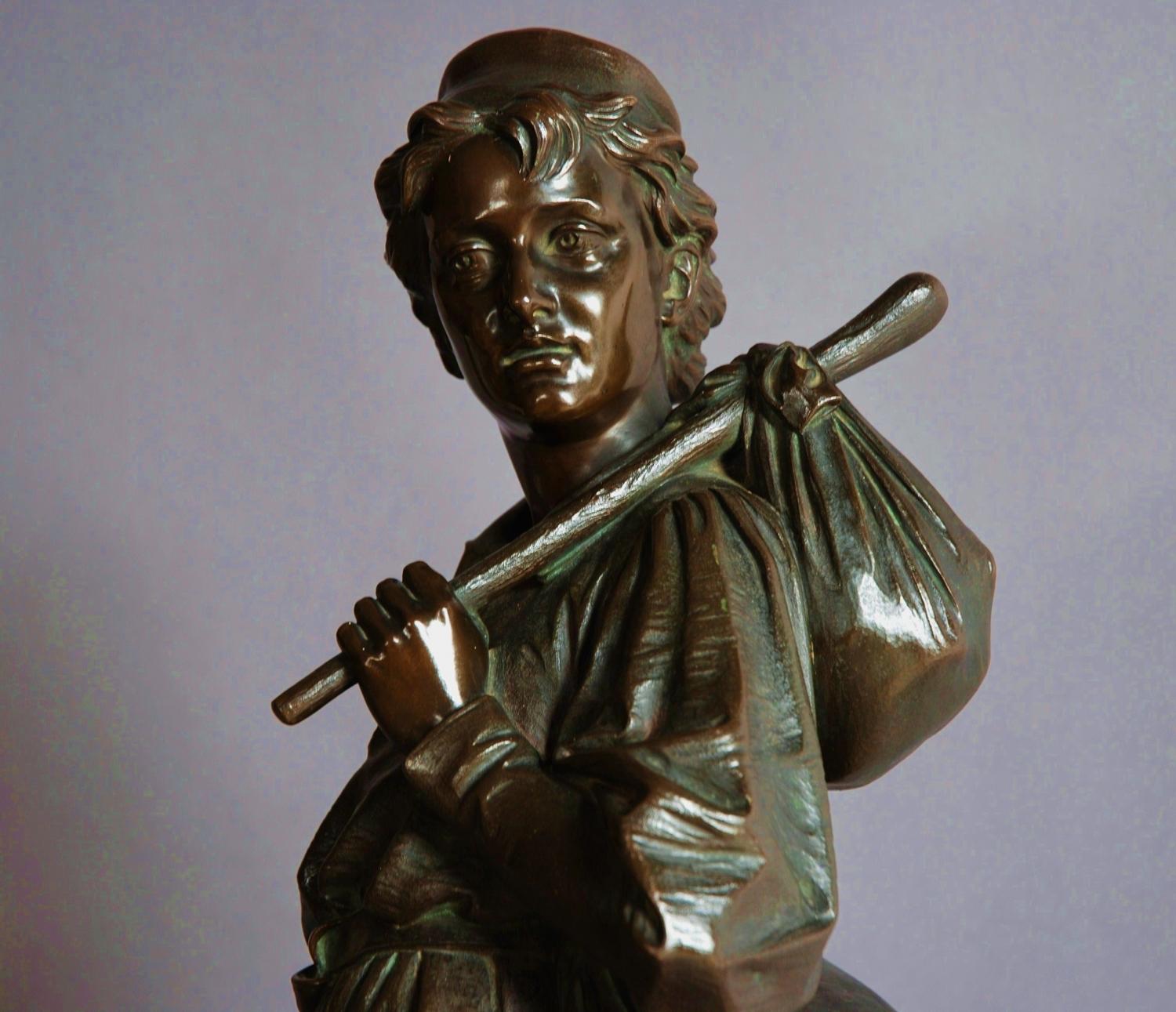 A fine example of a large 19th century bronze figure of Dick Whittington, by the sculptor Charles Bell Birch (signed & dated 1873) - ADDITIONAL IMAGES CAN BE VIEWED BELOW:

He is depicted here leaning against a 'London' milestone holding a bindle containing all his possessions.

This bronze was purchased from a private collection and to our knowledge there are no other examples of this particular figure, by this artist, in bronze.

Charles Bell Birch was born in Surrey in 1832 and was son of the author Jonathan Birch (1783-1847). He studied at Somerset House School of Design in London, his family then moved to Berlin in Prussia, where he continued his studies at the Kurfürstliche Akademie der Künste, under the eminent German masters Ludwig Wilhelm Wichmann (1788-1859) and Christian Daniel Rauch (1777-1857).

His father’s friendship with the Prussian royal family enabled Birch a number of opportunities and he was commissioned in 1852 by Kaiser Friedrich Wilhelm IV to execute a bust of the Earl of Westmoreland, British Ambassador to the Prussian Court. Birch returned to England shortly after this and entered the Royal Academy Schools, where he won two medals. In 1859 he entered the studios of the distinguished Irish sculptor John Henry Foley and spent the next ten years as his assistant. During that period, he modelled the Arab steed in Foley’s equestrian statue of General Outram.

Birch first exhibited at the RA in 1852 and tried his hand at all forms of sculpture and also painted both portraits and water-colours. However, his style was has been described as ‘a naturalistic veneer upon a classical foundation’. He worked in a variety of media and created a considerable number of statuettes, reliefs, medallions and statues.

In 1864 Birch won a £600 prize in an Art Union competition for his Wood Nymph and the popularity of the work led to it being exhibited in Vienna, Philadelphia and Paris. His other works included The Last Call (1879) (depicting the simultaneous dramatic death of a trumpeter and horse in battle), his monuments include Lady Godiva at Liverpool and his heroic bronze figure of Major-General William Earle (1880) standing athwart a Zulu shield on St George’s Plateau at Lime Street, Liverpool. That same year, he modelled the much criticised Griffin on Sir Horace Jones’s Temple Bar Memorial in Fleet Street. Birch’s statues were few in number, but highly accomplished in execution. His magisterial bronze figure of Benjamin Disraeli, 1st Earl of Beaconsfield (1883) in his Garter robes stands on the steps of St George’s Hall, Lime Street, Liverpool.

Birch also produced a bronze statue of Queen Victoria which can be found in New Bridge Street by Blackfriars Bridge, further copies were turned out for various parks & gardens both in the UK and abroad. A plaster copy of Birch’s life-like and highly dramatic Lieutenant Walter R Pollock Hamilton, VC Memorial may be found at the National Army Museum in Chelsea, London.

This bronze is in excellent condition. 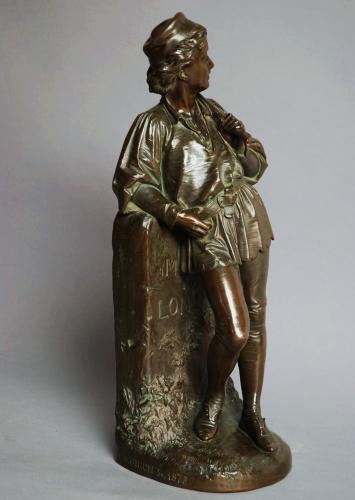 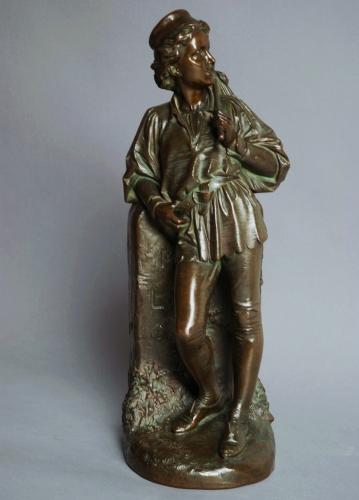 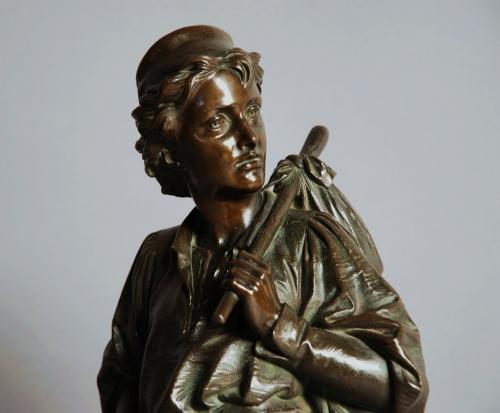 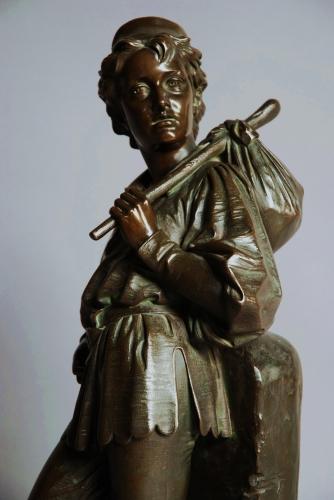 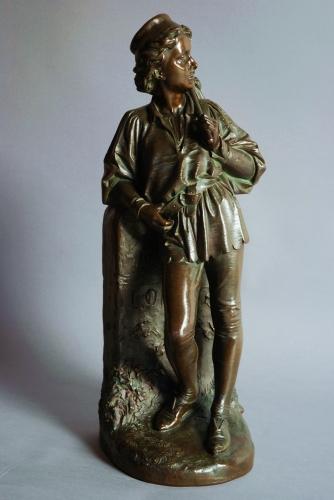 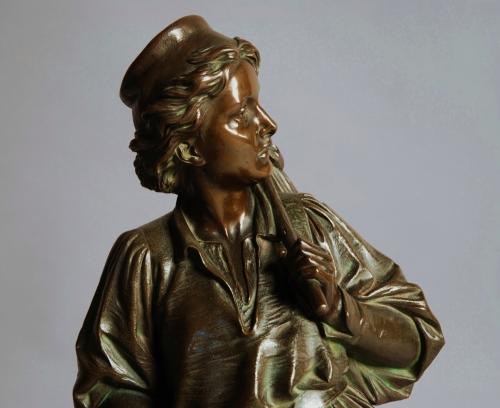 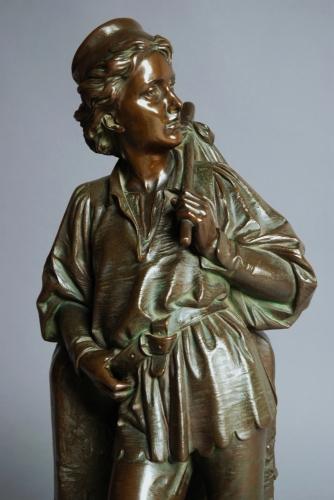 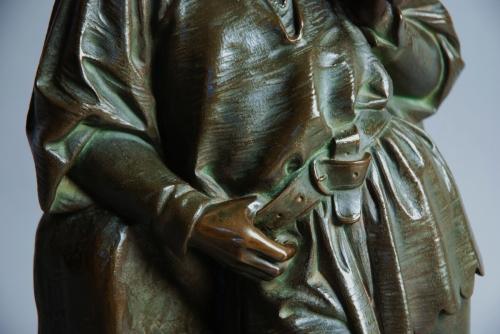 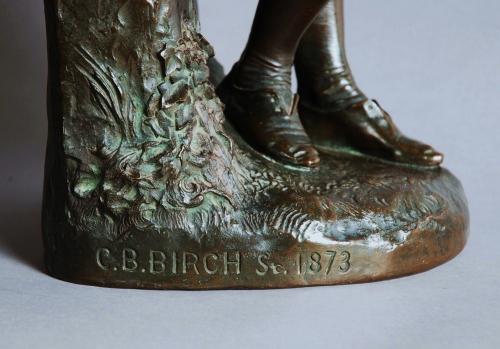 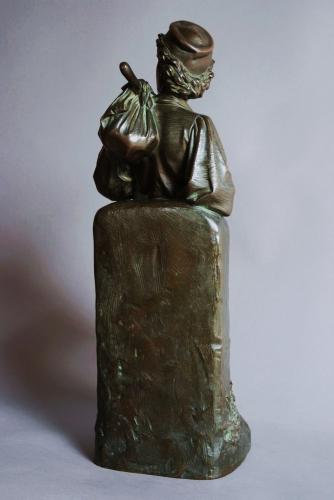