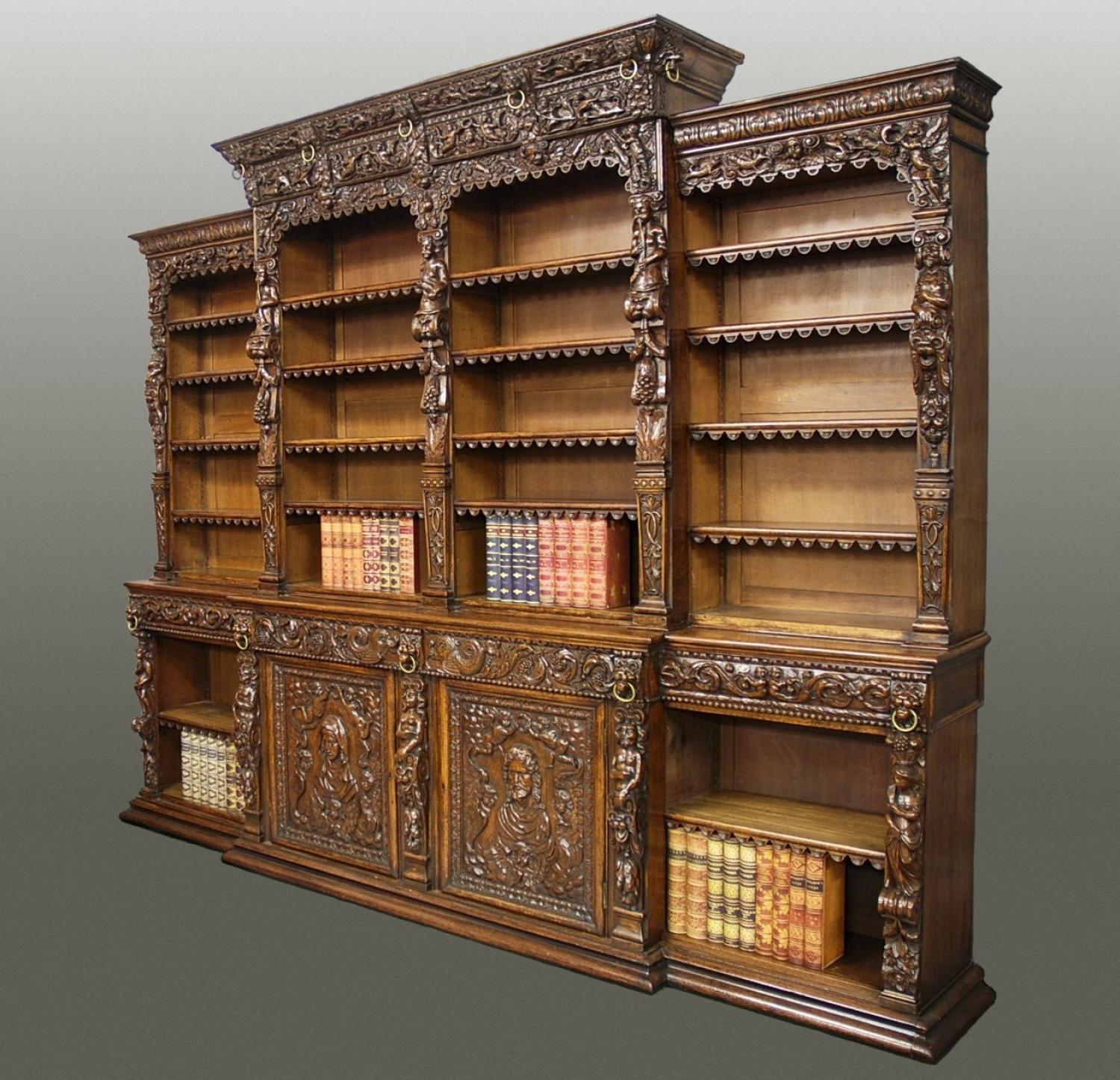 This superb bookcase consists of a slightly taller central section, of breakfront form, with a finely carved highly decorative cornice depicting hunting scenes (a popular subject in the Renaissance period).

This scene depicts cherubs holding wreaths (the wreath symbolising being saved from sin & evil), cherub faces (symbolising The Soul), animals including deer, wild boar & hounds, fruit including pomegranites (symbolising fertility, abundance & marriage), foliage and lion masks with brass rings in their mouths (symbolising the Power of God). This style of carving is typical of The Warwick School of Woodcarvers, similarities of the carving being found in the altar rails at St Mary’s College, New Oscott, Sutton Coldfield in Warwickshire – see below for further information.

The cornice is supported by three tapering carved caryatids leading down to carved animals, berries and foliage, typical of the Renaissance style.

This section has eight adjustable open shelves with carved decoration to the edge to give the appearance of leather.

Each of these outer sections has four adjustable open shelves with the same carved decoration to give the appearance of leather.

Below this are three carved caryatids and lion masks with two large central cupboards, the doors of the cupboards are finely carved, one with the Virgin Mary and the other with her son, Jesus, each being surrounded by superbly carved cherubs holding wreaths and winged cherub faces, both cupboards having shelves inside.

The outer lower sections each have a finely carved frieze, one depicting hippocamps (sea horses) and the other carved mermaids leading down to further open shelves and terminating with the moulded plinth that supports the bookcase.

The back consists of oak panelling which is another sign of fine quality craftsmanship.

We have found similarities to the carved cherubs and foliage on this bookcase in the book ‘Continental Church Furniture in England’ by Charles Tracy, pages 123 & 124, plates 85 & 86.

These altar rails could have influenced carvers from the Warwick School of woodcarvers who produced superbly carved pieces of furniture similar to this bookcase in the 19th century.

Many of the subjects carved within the bookcase have symbolic meanings, all very much connected to The Church and religion.

Due to the grand scale of the bookcase, it breaks down into nine sections for ease of assembling and transport.

The bookcase is in excellent original condition and can go straight into a home, office or library – a bookcase of such originality and quality is seldom seen on the open market. 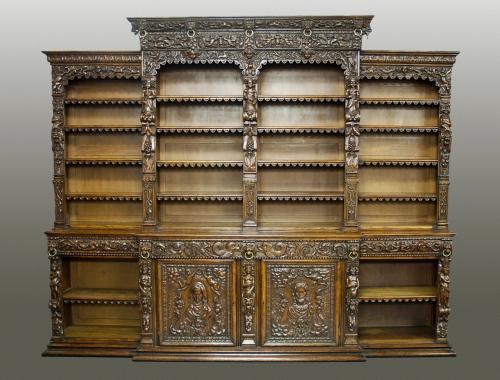 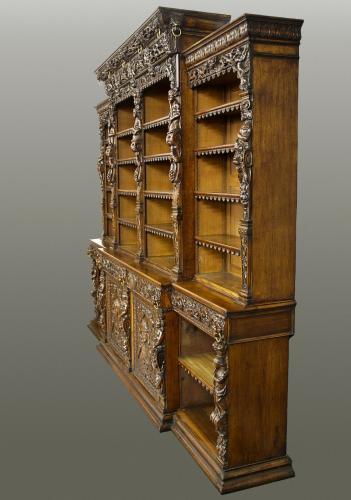 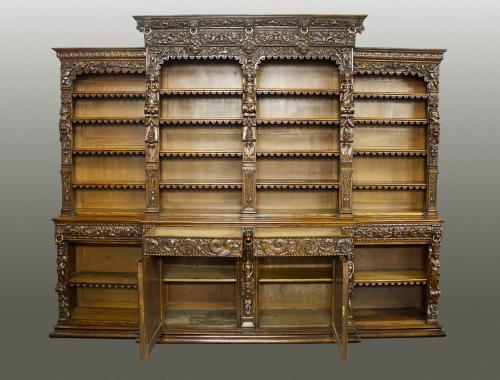 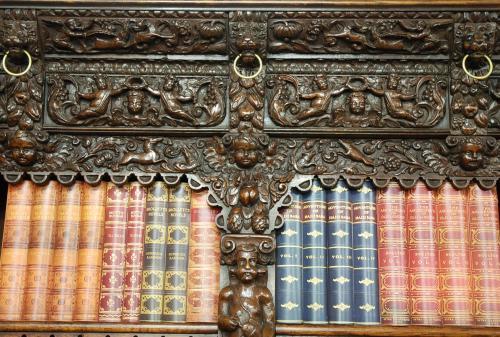 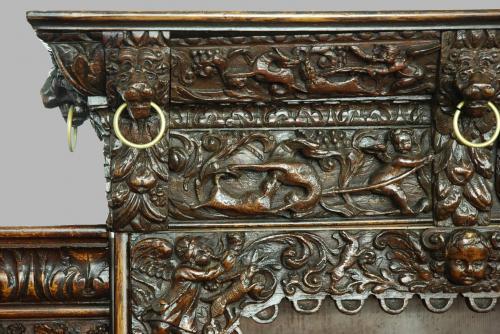 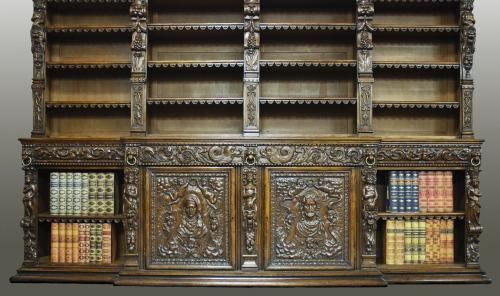 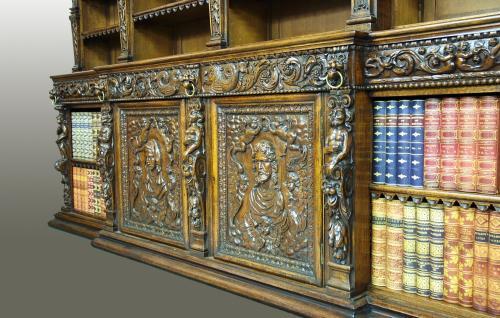 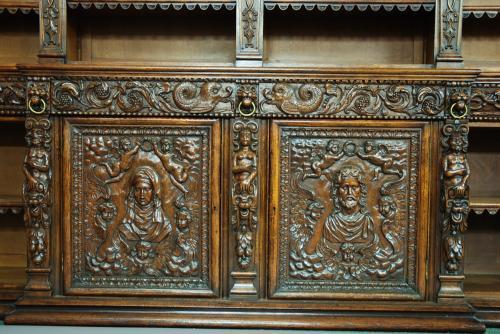 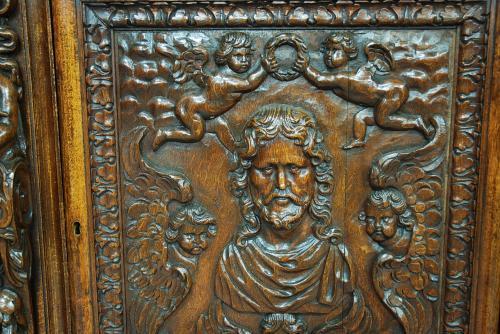 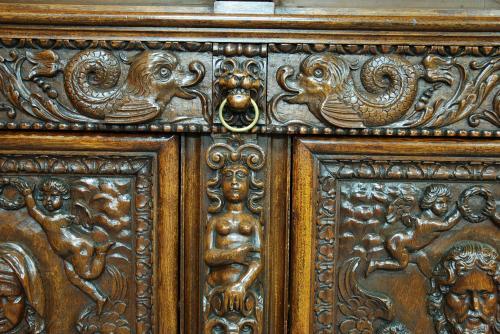 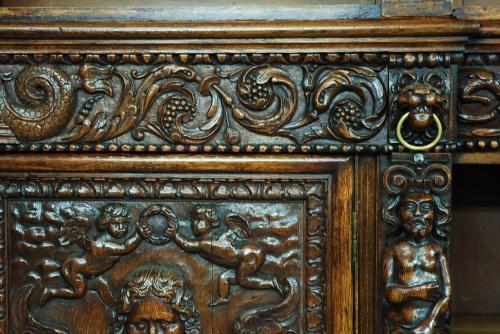 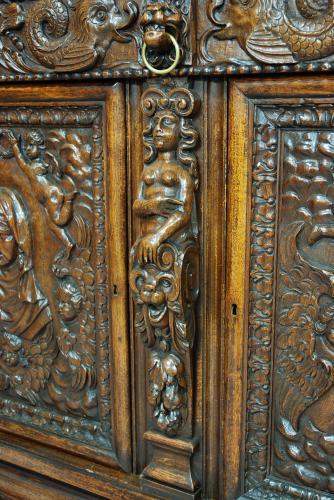